I don't think I ever started a thread for this thing. This was the first two seater I think I ever saw in person, definitely the first one I ever went for a ride in, sometime around 1999? It belonged to a mate of mine and was certified for an L20ET which broke, he ended up buying another one that was pretty mint so decided to sell this one, I basically got it as a rolling body. There was also another 2+2 which has come and gone in the mean time. This car is a little bit odd - it has factory option blacked out chrome which I haven't seen on another car in NZ.

This first photo is from back in the day, that's my second 2+2 in the back ground.

I've had a few thoughts about what to do with this but then this happened:

Saw a guy wrecking a crashed Cima on Trademe so I asked him about the engine, he didn't want much for it but it's got a couple of broken bits on it, decided to buy it and got the auto bell housing as well. It's a VK45DE, I don't really need it right now as this is going to be the last car that actually gets worked on but it was too good a deal to pass up (I think). Got it home and can't actually put it in the engine frame because the bell housing to engine bolts are huge, M14x1.5.

You can actually get manual trans adaptors for the VK45s that have the starter hole in the right place which is good, I'll probably end up making one as they don't look that difficult and are pretty expensive from the States (~$600US).

I got some bolts from Blacks so I could put the engine in the stand, it's mostly there. The bell housing pattern is much bigger than the RB one so even with the stand arm things extended all the way out I can only get bolts in 3 out of 4, will make probably two new ones for the lower holes that are a bit longer at work next week.

The left hand rocker cover is unfortunately cracked, I couldn't see it the other day as the heater hoses were in the way. There's quite a few broken bits and pieces on the back of the motor, nothing too serious. It must have been shoved back into the firewall I think. Good thing about these motors is there are quite a few around here and there are heaps in the States and bits aren't too expensive, I can buy brand new rocker covers for it and basically everything else that's broken too.

I took the hydraulic fan pump off as well as it was damaged and I'm not going to use it, a standard water pump bolts straight in to where it was. I think I'll make some pulleys for it now that I have access to the technology.

A quick Google would lead me to believe this is approximately 70Kgs lighter than an RB25DET.

Will need to pull the sump off and see how the whole oil filter arrangement works, you can see in the bottom picture above the oil filter sticking out the side which is actually part of the sump.

I think to get the motor low enough to not have to modify the bonnet (which I don't want to do) I'm going to have to make another sump and the stock one is front bowl which I don't think will work as it'll be pretty much where the crossmember is.

The plan for this car at the moment (as my plans always change) is:

I've seen a 1UZ done with 4 RB26 throttle bodies and it looked like it worked pretty well and should be a good way to keep the motor nice and short.

Pulled the inlet manifold off so I could have a look, the inlet ports are pretty massive. I sat an RB26 throttle body flange on top of two of them and the spacing is a little bit off but I think it's workable.

I have to walk between the VK and the black car to get into the garage and the exhaust manifold has been in the way as it's got a cat welded to the end of it so I took it off, pretty interesting curvy looking manifold, big exhaust ports too, they measure about 39mm at the exit, I've read some of the other VKs have ports up to 50mm in diameter. I haven't really thought about what wheels I'd like to put on it, it depends on how much wider it is with the new rear subframe in it, I think I'm going to put flares on this one. The wheels will probably end up being 17s again, I've always liked Enkei RPF1s but the offsets were never good for a Z. I'll do some measuring and see how much wider it is. This guy has double or maybe triple stacked spacers on the back of this to get them to sit right. 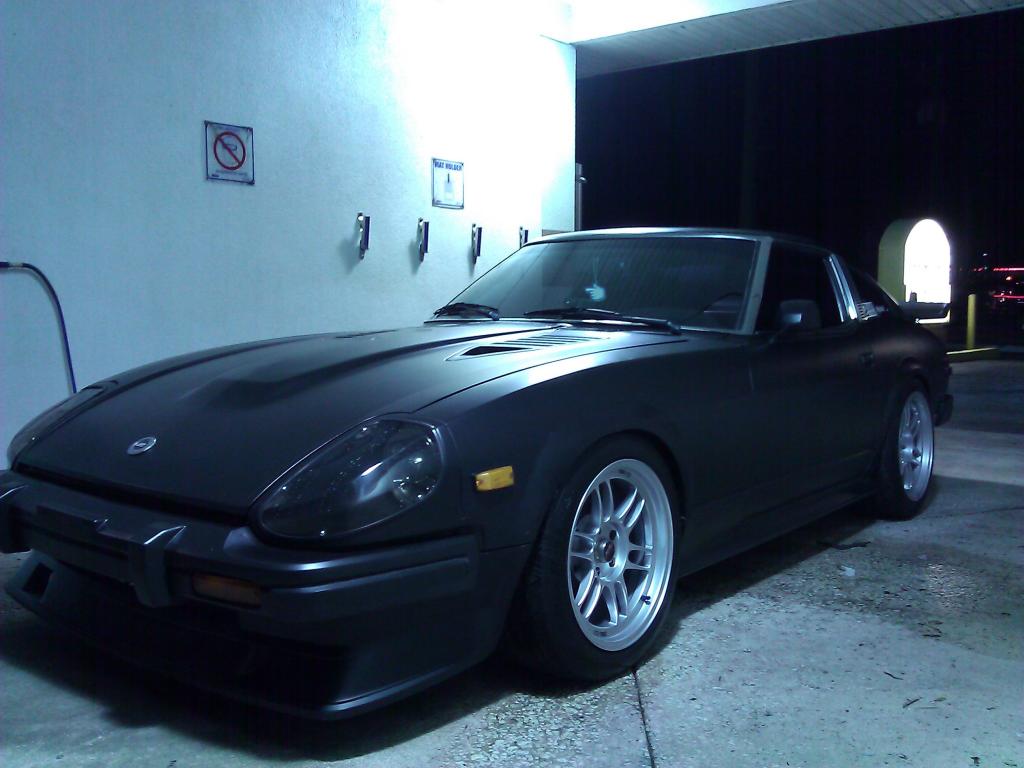 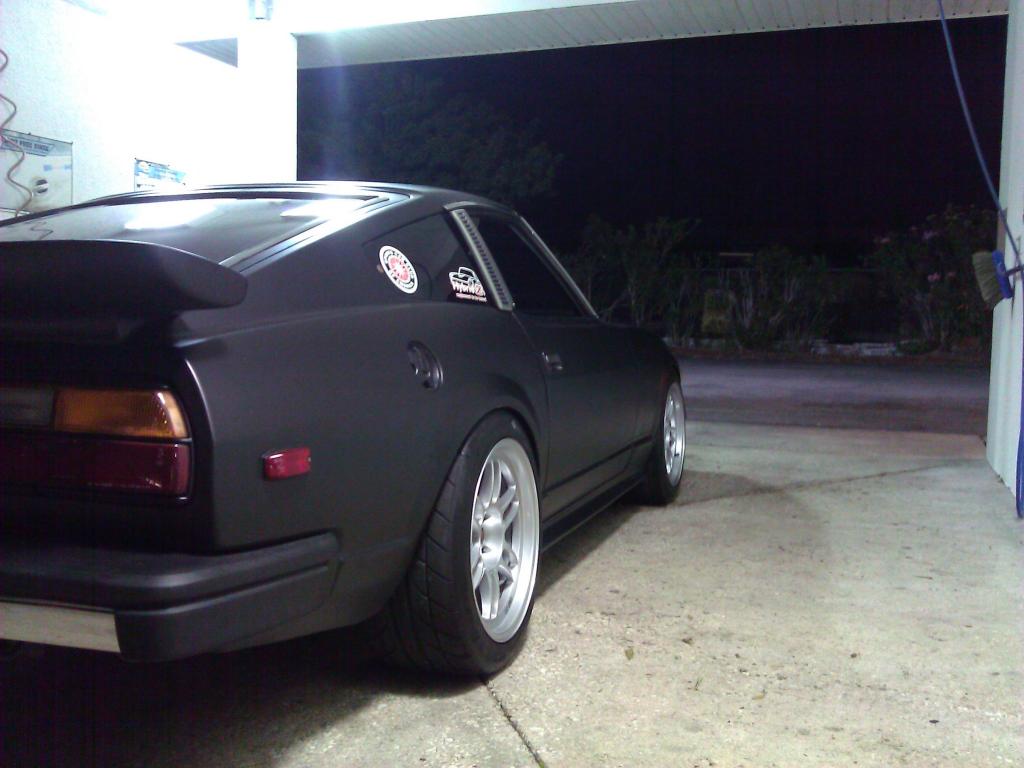 I've been mucking around with some modelling of the VK45 manifold flanges, thought I'd see how an adaptor to the RB26 throttles would work, this is at 20mm thick, I don't think the transition is too bad, I could probably go a little bit taller, maybe 25mm. I think with an adaptor like that, the throttle bodies and then trumpets it would still be well under the height of the factory inlet manifold.

Excuse the horrible lofting, this was basically plonking one flange on top of the other. I'd still need to figure out how to work the injectors into the mix, maybe full race spec with stand off injectors?

Now if I could just liberate one of these from work I'd be 90% there. 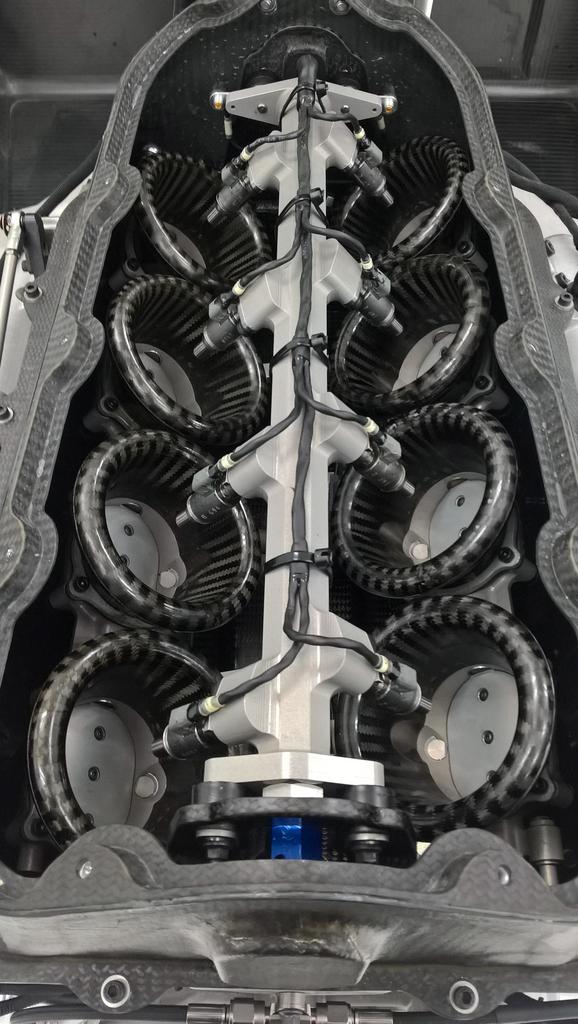 I mostly finished the model for the throttle body adaptors apart from somewhere to put the injectors, I've given the model to one of the guys at work to 3D print out of plastic so I can see what it looks like and make sure it's going to work.

We got rid of the compressor in the machine shop at work so I've got a bit more room there so I'm going to take the V8 to work on Friday while I've still got the HTC ute. I've spent quite a lot of time looking at what I can use to replace the broken bits on it - unfortunately the VK56 thermostat housings which are a lot slimmer don't fit on the VK45s so I'll have to get another 45 one. I think the rocker cover is saveable, will try and find someone to plastic weld it.
Nissan 280ZX 2 seater RB26 powered.
Top

Not very exciting but I got the new non hydraulic fan water pump for this thing from eBay. 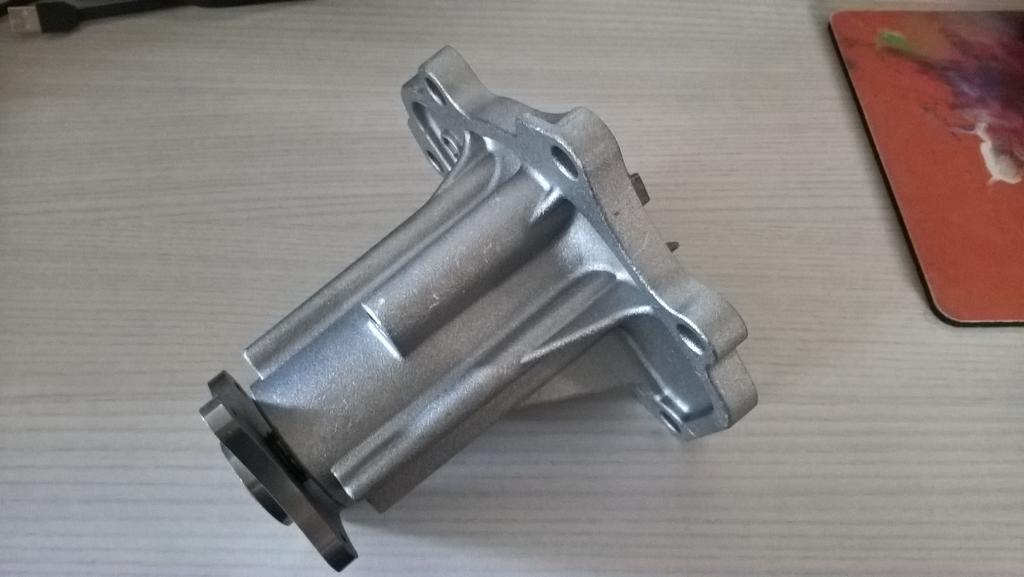 Took the sump off the VK today and it looks like it's doable, I think I'm going to have to make a sump flange about 25 or 30mm thick and put two ports in it that run out the front or side for a remote filter mount. The engine itself looks pretty clean on the inside which is good, 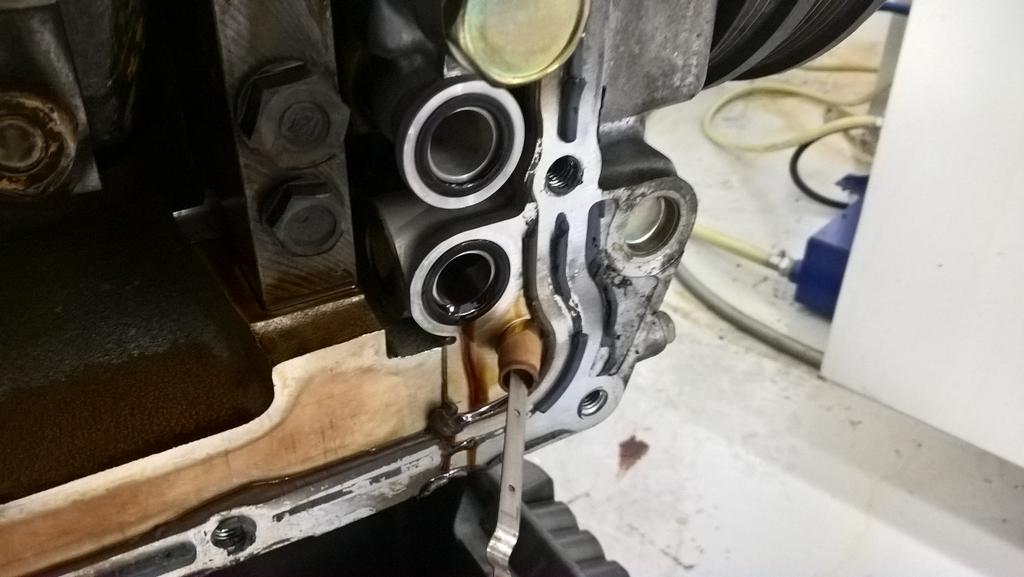 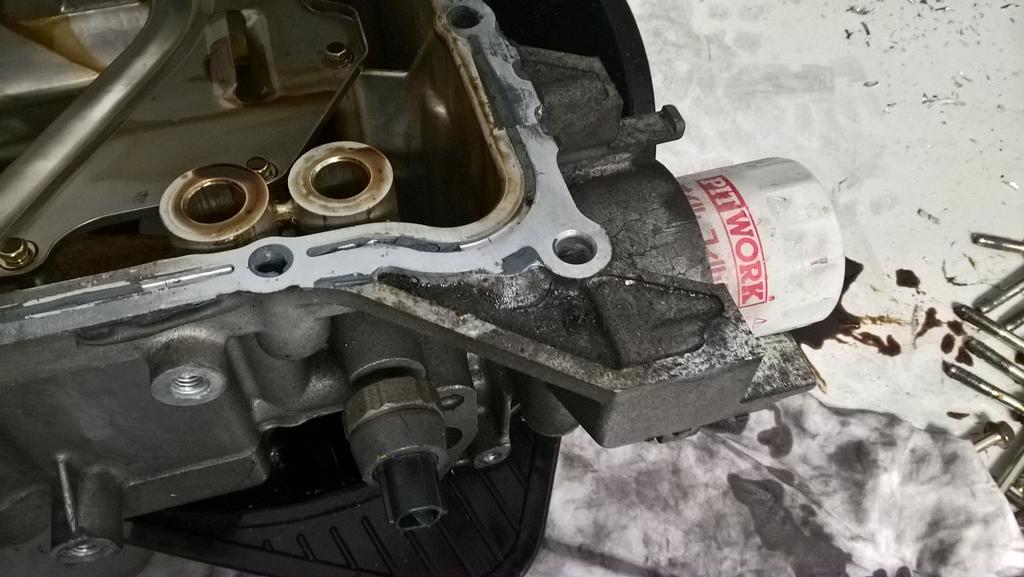 Turns out I ordered the wrong cam angle sensors, they still fit but the plugs come out in different directions, the engine actually uses 4 or 5 sensors that are basically the same so I've swapped them around so the ones visible on the top of the engine match.

Drew up and cut out some engine mount plates, there's a boss on the block that I missed as I measured up off the engine mount so I need to modify the plate slightly for that.

Also drew up some exhaust manifold flanges so I'll cut them out another day. 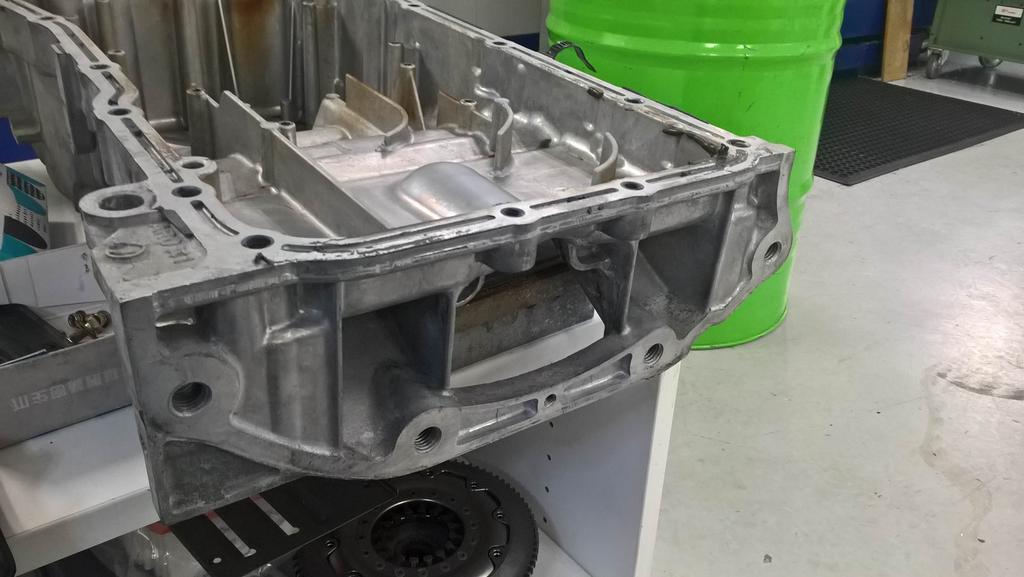 Work has just bought a big 3D printer that prints a carbon fibre impregnated plastic stuff called Windform, one of the things it's used for is inlet manifolds so I think instead of machining them out of ali I might 3D print them instead. I thought about printing manifolds with throttle bodies built into them but will probably still use RB26 throttle bodies. I'm pretty happy with where they're at apart from the injector ports, I'm going to put them on the inside of the valley rather than the outside like OE, just need to measure the port to see what kind of angle I should put them at.

I think I'll print one out of nylon once I've figured out this injector thing.

I'm probably just going to have to bite the bullet and buy a new thermostat housing from Nissan, they're about $140.
Nissan 280ZX 2 seater RB26 powered.
Top

First trial of the 3D printed manifold, it needs a bit of tweaking but overall it's pretty good. 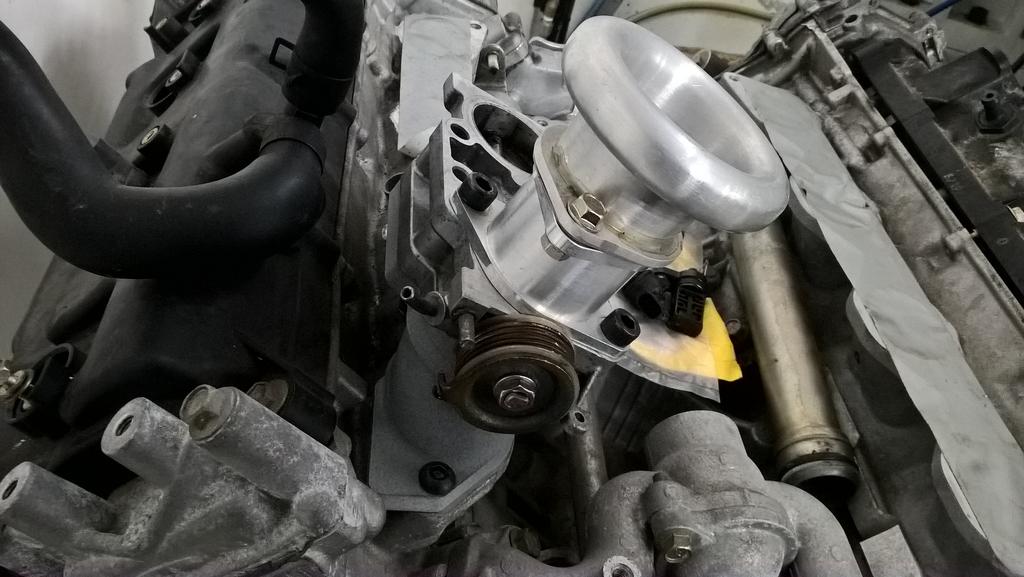 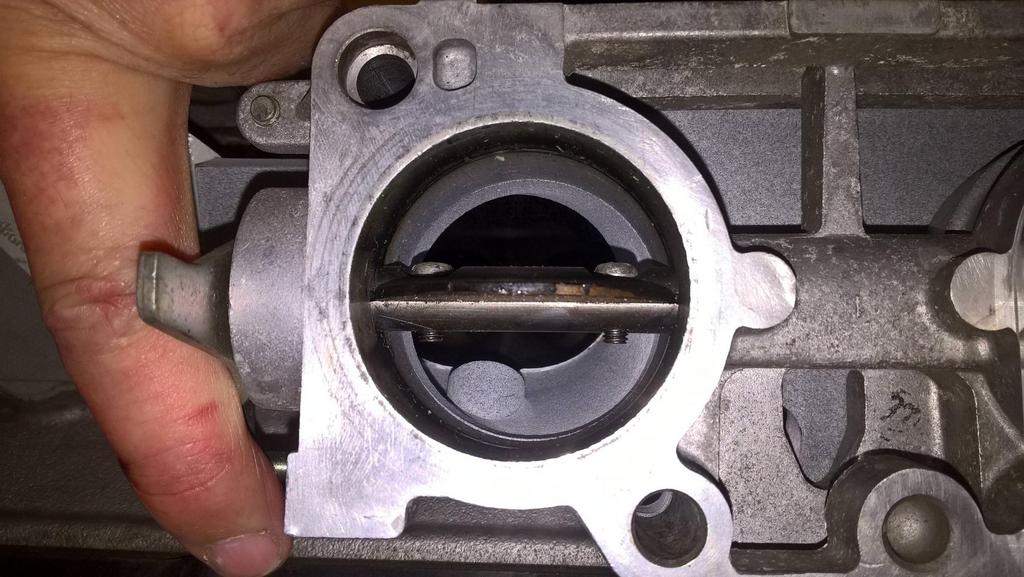 Tossed up for a few days on whether to spend $220 to get a new thermostat housing thing and decided I'd try and fix the old one first. Basically the flange that bolts to the engine is mostly gone and the long part with the cap fitting on it is broken off close to the main body.

So I took a photo of the flange on the engine, it's really hard to measure the bolt pattern as none of the bolt holes are in line, put the photo into Fusion, measured the rectangle in the centre of the flange and sized the photo of that, then drew up the rest of it, and cut it out of cardboard on the table cutter to see if it was correct, looks good enough for me.

When I get a chance I'll mill it out of some 5/8" ali flat bar and mill off the broken flange, I'll put a male & female step in the parts to locate them then weld the two bits together. I need to find a 35mm right angle bend which I'll weld onto it to replace the broken pipe. 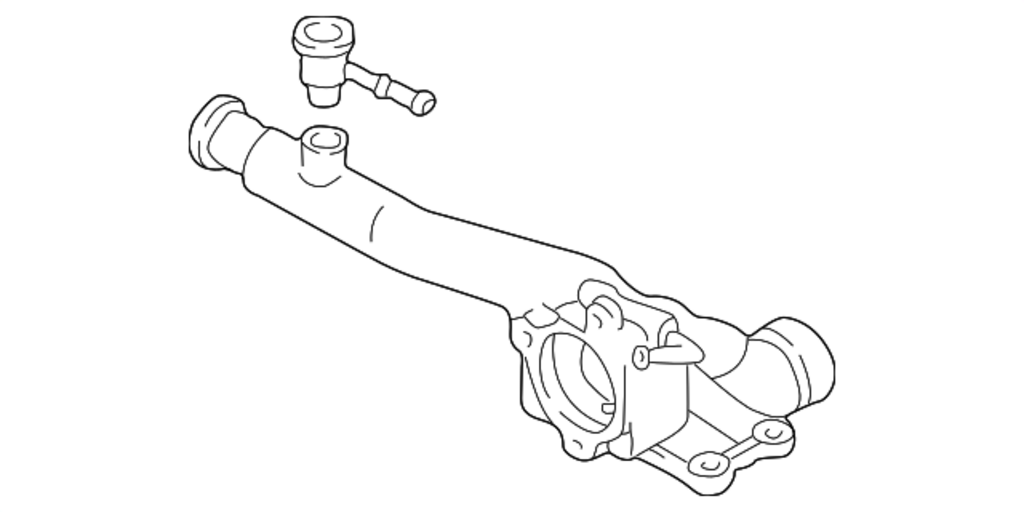 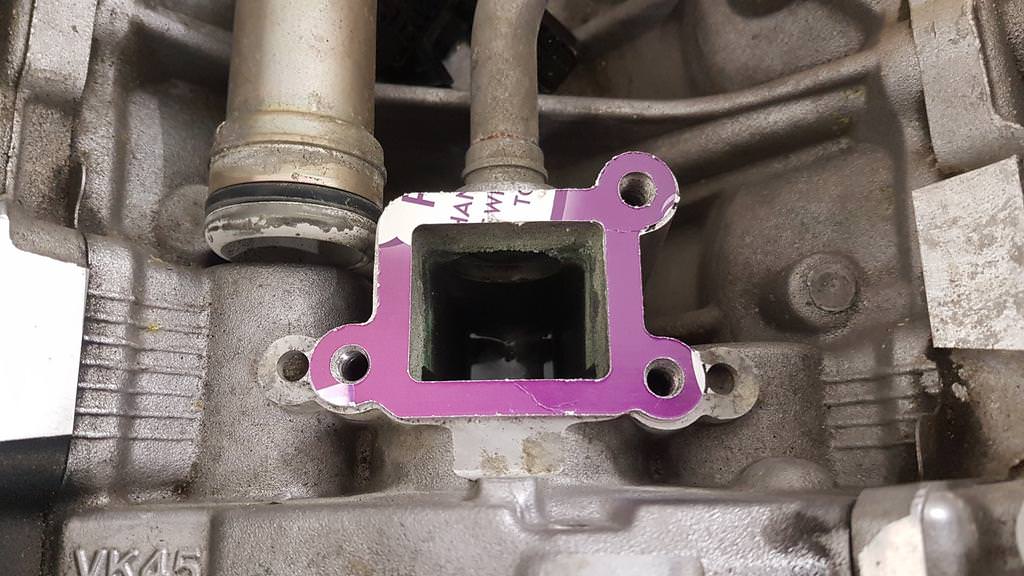 How much of a squeeze is it to get the VK45DE into the engine bay of the 280zx?
I assume the width is tight, and the height could possibly be helped with a dry sump... just thinking for future options on mine...

Grunzter wrote: ↑
Tue Nov 20, 2018 8:03 pm
How much of a squeeze is it to get the VK45DE into the engine bay of the 280zx?
I assume the width is tight, and the height could possibly be helped with a dry sump... just thinking for future options on mine...

I've seen a VK56 in one which is a little bit bigger than the 45 (I think), it fit pretty well except it didn't clear the bonnet, I think I should be able to get mine under the factory bonnet.
Nissan 280ZX 2 seater RB26 powered.
Top

I've been kind of looking for a gearbox for this for a while and just bought a complete VQ35DE and 6 speed box out of a 350Z, off to Queenstown with James this weekend to collect it.

The gearbox has a dicky synchro which is pretty common, parts aren't too expensive for them, but if I can sell the engine then it'll pretty much pay for fixing the box and will still be cheaper than the other ones I've seen for sale.

I have kind of been wanting to put a 6 speed in the black car though...
Nissan 280ZX 2 seater RB26 powered.
Top

Here's the box, it's pretty big & heavy. I think I got a pretty good deal, the VQ35 ended up coming with an almost brand new set of ID1000 injectors, a Honeywell oil pressure sensor, Mocal oil filter sandwich plate, plenum spacer, sump spacer, aftermarket knock sensor and an almost new bigger E throttle kit, so I've stripped all that stuff off the motor to sell separately, apart from the injectors which I'll put in the black car. 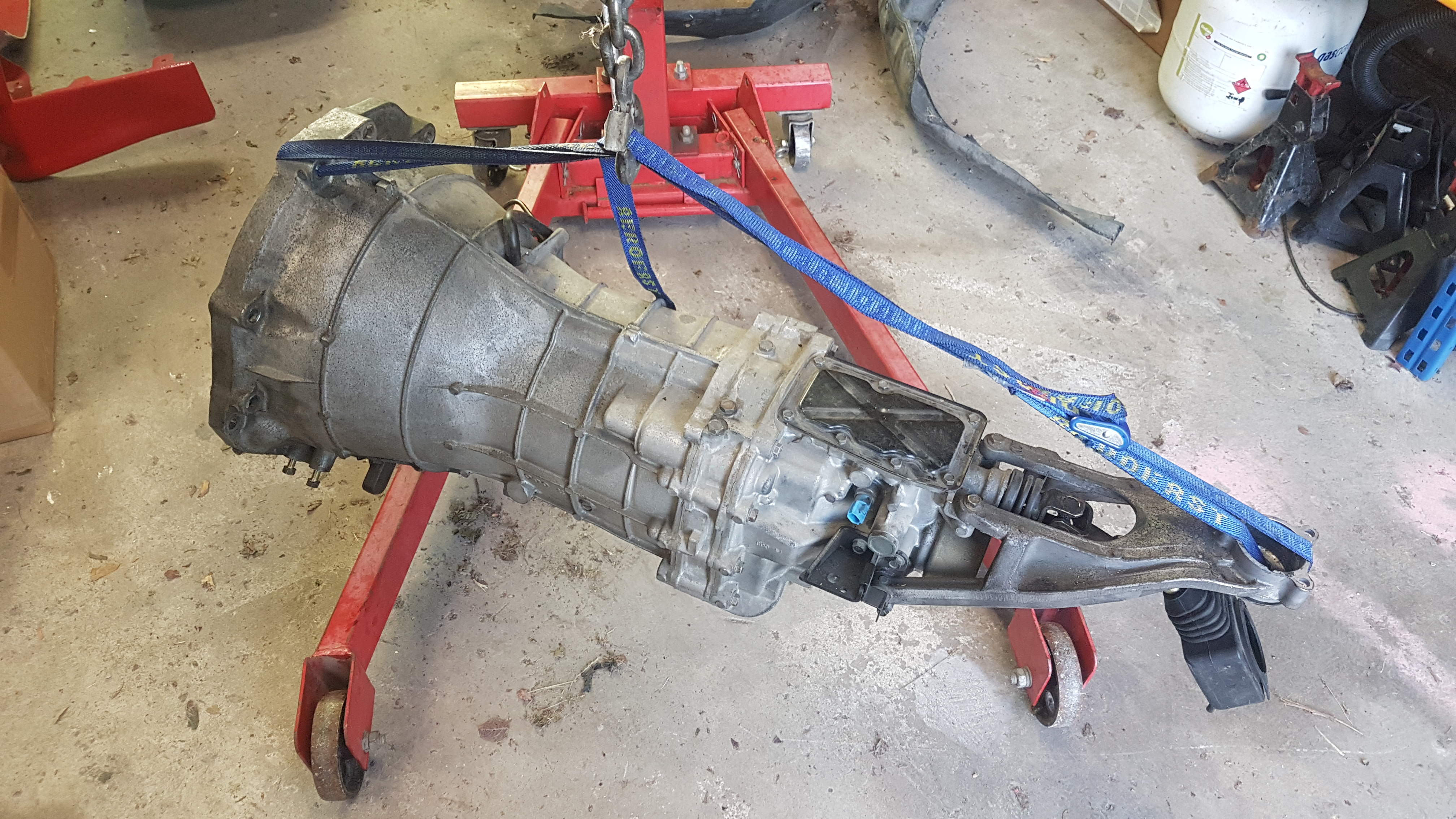