Really that's rather handy haha. Next time your wanting to buy some tungstens or something along the lines of welding just let me know and I can do a good deal for you as it's rather simple really, however you may already get a good deal through your work....?


Regards
Deano.
Good things are worth waiting for, but great things happen at once.
Top

Got another open R180 that is 4.375:1 from Tristan, it came with another set of CV axles (I must have about 5 or 6 sets now) and the 3x2 companion flanges that I need. So now I just have to wait for the LSD to work it's way down from Auckland and I can put the rear end back together and back in the car.

I realised that the CV axles don't need the flanges that go into the diff so I don't need to worry about swapping in the buttons to bolt them to etc etc.

Still need to drop the auto out at some stage.

I've fully welded the inlet manifold now, it doesn't look anywhere near as nice as I would have liked but should seal, I might grind it down and weld over it again to give it some shape if I can be bothered. Need to start port matching it and make some cut outs for the return springs/linkages. The original RB26 manifold studs aren't going to work, the thickness of the trumpet flange is only about half of the thickness of the RB plenum so I'd have to pack the nut's out heaps which I don't want to do, might just use some stainless cap screws.

Progress is progress! They are going to sound incredible

Off topic, is this you: https://www.youtube.com/watch?v=_ZGvQHMHrWU ? (Late night youtube surfing)
In a long distance relationship with my 260z
Top

The crownwheel in the LSD turned out to be quite pitted in one spot when I gave it a good clean so I've dropped that and the 4.375 diff off at James' so he can work his magic on it. The 4.375 should be pretty good in this car I think, with the L series gearbox and a reasonably high redline it should be okay.
Nissan 280ZX 2 seater RB26 powered.
Top

Progress has been a bit slow on this thing, I faced off the inlet manifold the other day and these sweet gaskets showed up, I'm not planning on running filters on it so these will prevent large stuff going into the motor.

Found another RB25 Neo for sale on Facebook so picked that up tonight, it's a 4wd one out of a Stagea and came with the 4wd auto box.

Manifolds are off, power steering pump and air con compressor are also off, motor looks to be okay, has a genuine Nissan timing belt on it that seems a bit loose, will change that at some stage. Inlet ports are very clean, it's got some "Ultra spark" coil packs on it which are apparently quite new along with iridium spark plugs.

Not too much has happened with this thing. I sold the original inlet manifold I made and have another one in the works which will be a bit tidier.

Got an EVA wing for it, brand new from Japan, ended up finding another one locally in Christchurch a couple of weeks later so I bought that as well.

I've started on making another sump out of aluminium as well, the current steel sump has no baffling and is touching on the steering rack mounts so I thought I'd just make another one.
Nissan 280ZX 2 seater RB26 powered.
Top

So after a lot of thinking I ended up buying another Z to take the engine and gearbox out of to put this car back to "standard" so I can sell it. I've got too many projects at the moment (and want to buy more) and I'm just not really that attached to this car.

So it's a 1979ish 2+2, it's been off the road for a couple of years, the story goes that a panel beater in Greymouth started working on it and then the owner lost interest (I think). There's lots of bits missing off it but the engine is reasonably complete and it has a 5 speed gearbox in it. 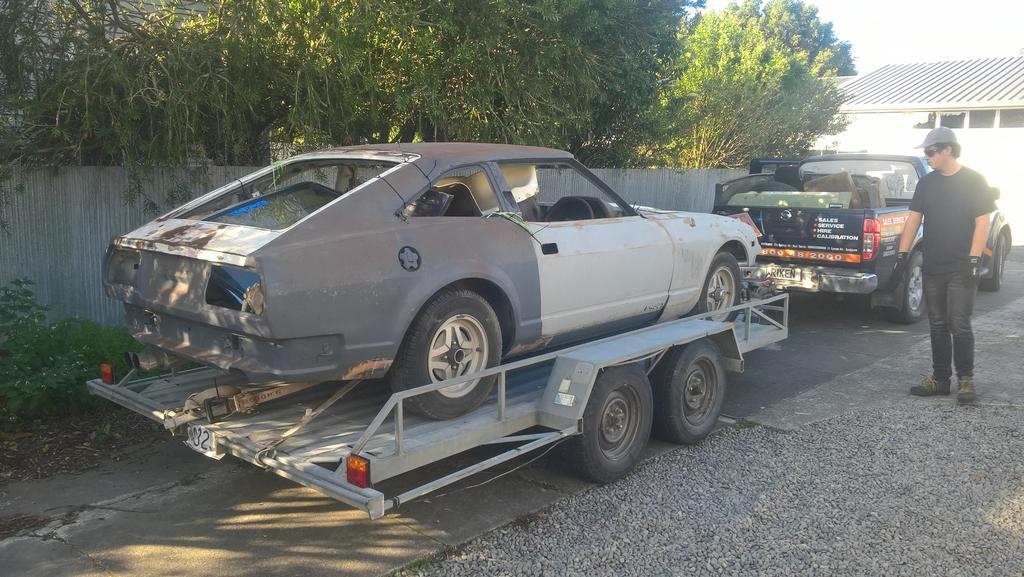 Somebody did some very odd disassembly on the engine in the 2+2, can't quite figure out why. It was unbolted from the box and also from the engine mounts so it looks like it was ready to come out but they'd also removed the fuel rail and bent it in the process so it took quite a while to get that straightened out.

So, after fixing a bunch of problems I managed to get the 2+2 started, first thing was the only air flow meter I could find had been sitting outside for over a year so after pulling it apart and cleaning and lubing it I managed to free it up.

I found a key in the centre console but it was basically solid rust, I tried it in the ignition and it wouldn't turn, I had a spare column sitting outside so I pulled the ignition switch off it which you can turn with a screwdriver and plugged that into the 2+2.

Next was the fuel pump wasn't working, the wiring was getting quite hot and also the pump itself was getting hot, I was going to take the pump out of the white car but thought I'd disassemble the original pump, so I did that and managed to free it up so I put it back in.

Pressurised the fuel system and fuel started to piss out of a rust hole in the fuel filter, so I borrowed the new one that I put in the white car. Tried to start it and it fired right up, ran pretty rough for a while but then cleared up (mostly). The water pump wouldn't turn so I pulled that off, picture below, think I might replace it. 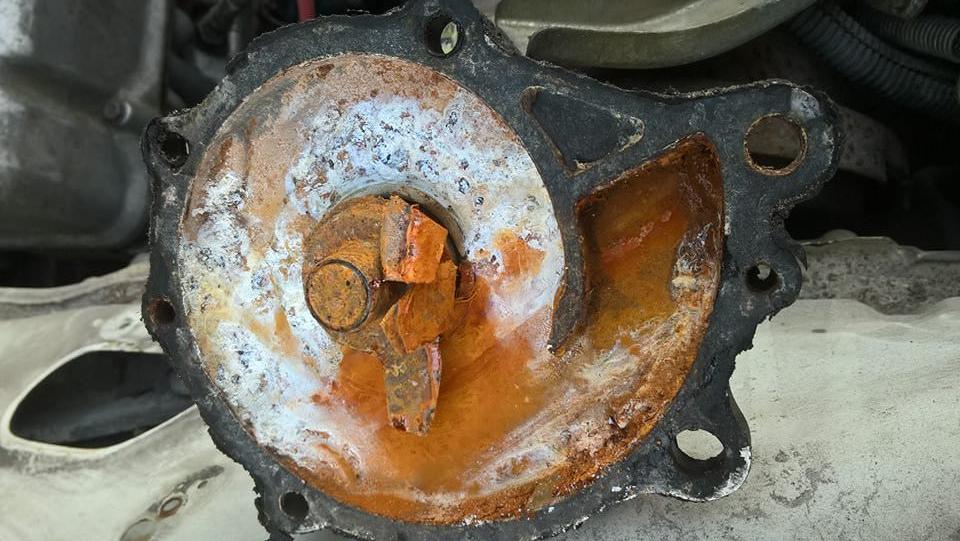 Also pulled the motor and box out on Sunday and put them in the white car, it's not fully in there yet but is pretty close. 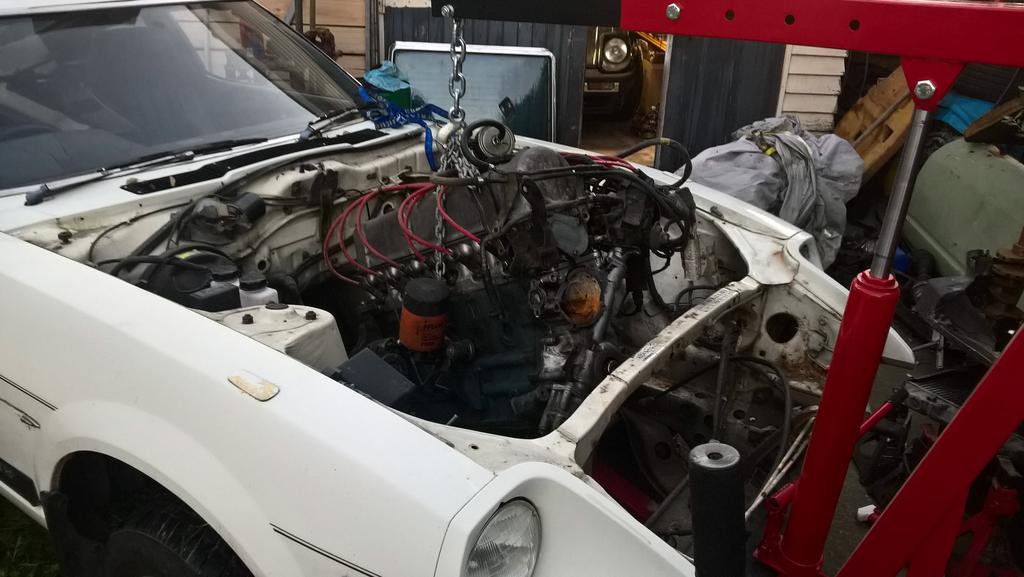 James put the R180 LSD I've had for this back together yesterday, I'll put it back in the car once the weather is a bit nicer. I need to get a 4.375 speedo drive cog and carrier, they're actually pretty cheap from Amayama. 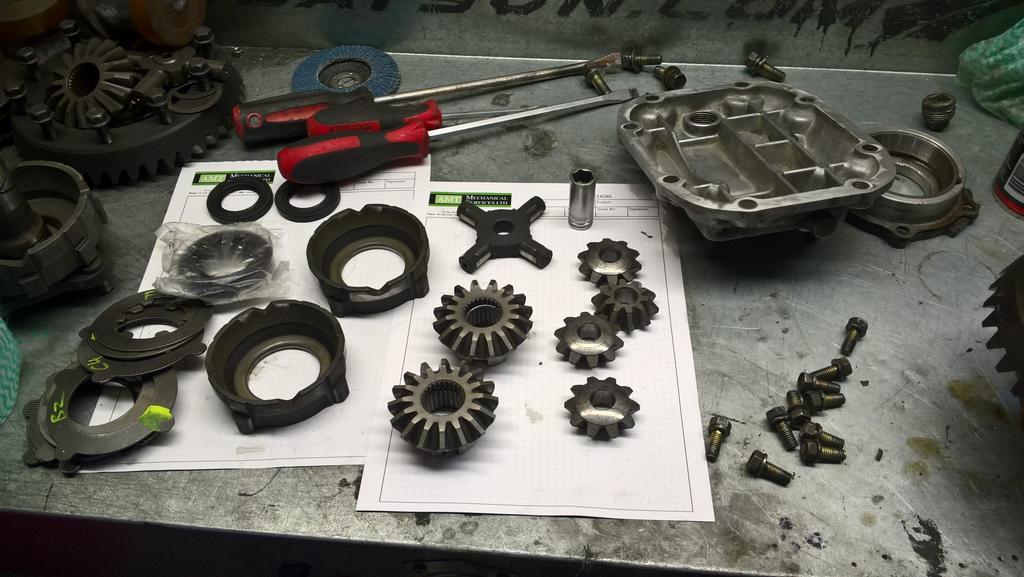 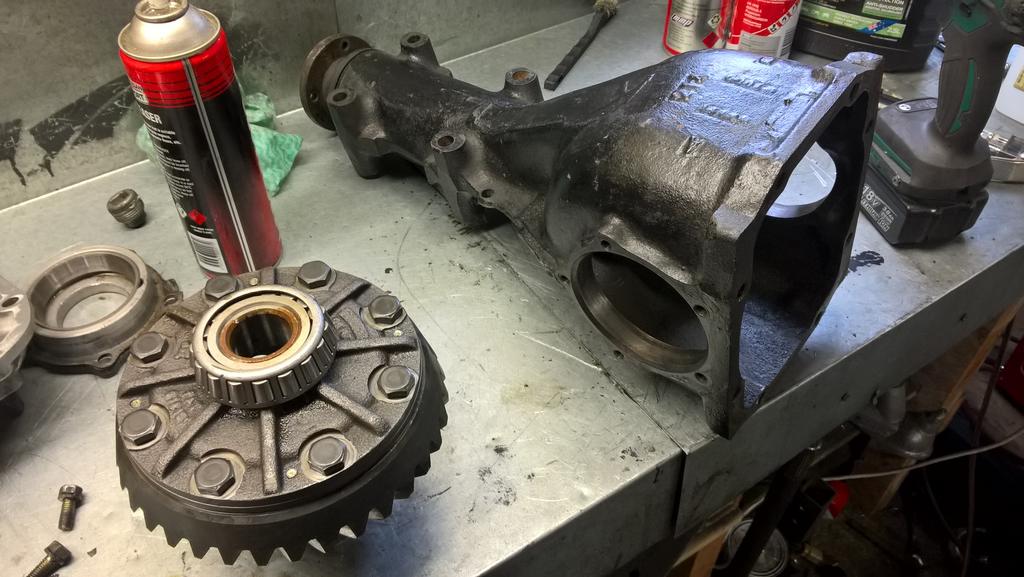 Oh, bought a new water pump, thermostat, clutch slave cylinder and new clutch hose for this too. The slave cylinder on the car was pretty rusty and the hose looked pretty average. I need to get a new radiator cap too.
Nissan 280ZX 2 seater RB26 powered.
Top

Pushed the car into the driveway with James' help today, now I can actually jack it up and work on it.

These are the titanium stub axle nuts that I bought ages ago. 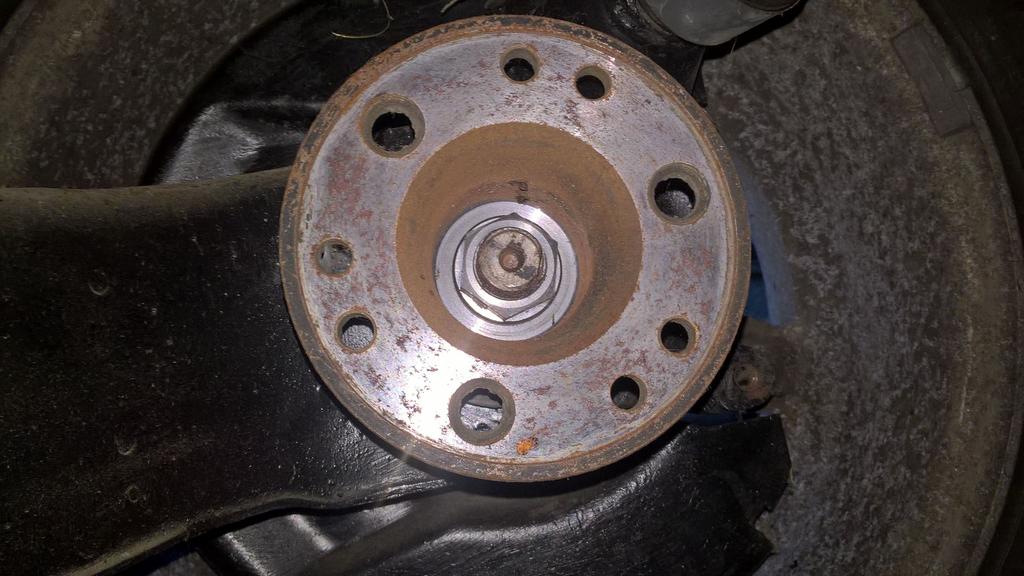 And got the diff in tonight. 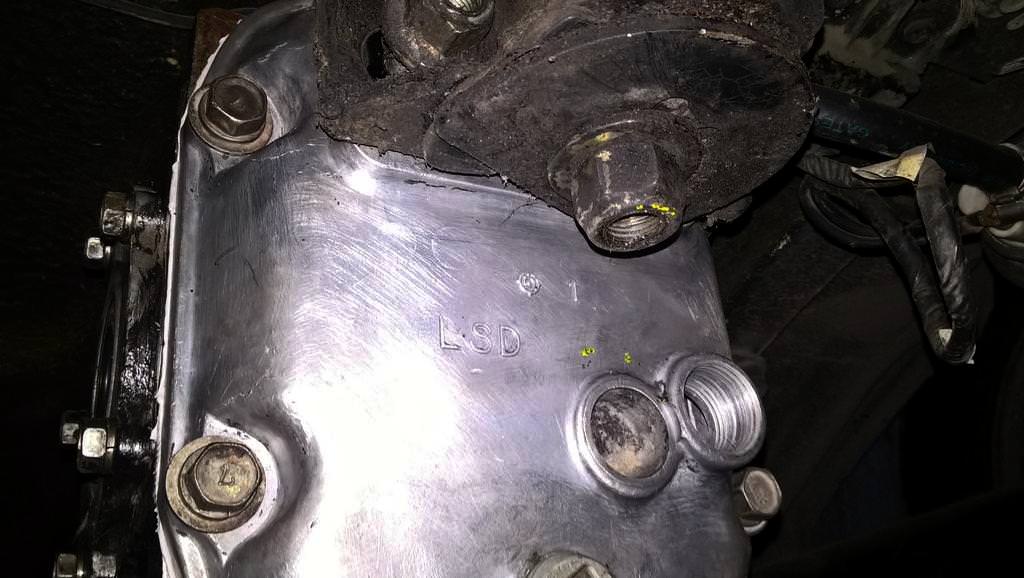 Parts parts parts. New water pump, clutch slave, clutch hose and thermostat. The water pump has a cast impeller and not a stamped one so that's a bonus. 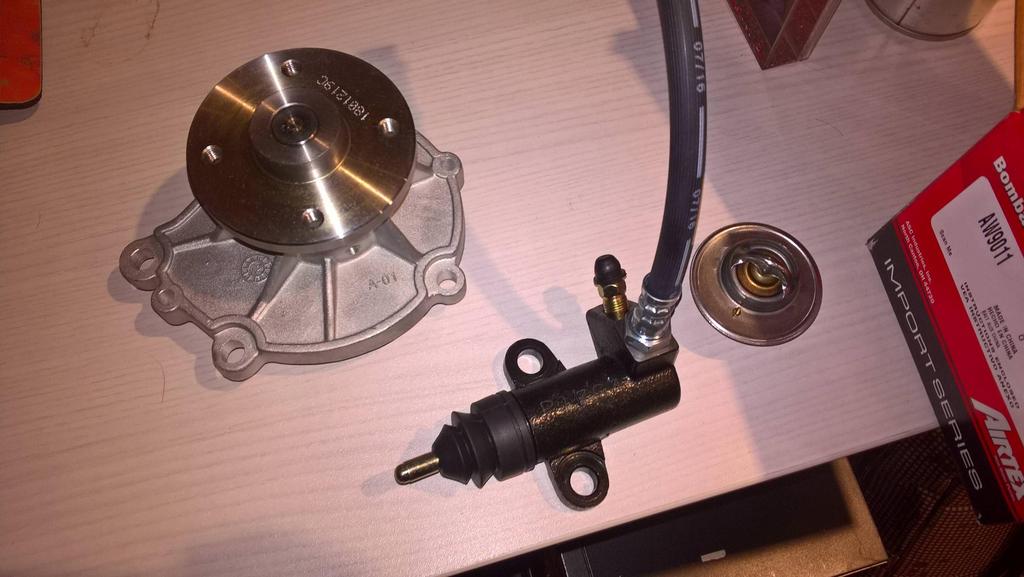