Once you are in Imgur, do the following:
- go to your 'images'
- 'click' on the photo you want to share
- It goes to that image, and a menu appears on the right.
- Choose the size of the image you want below, such as 'Large Thumbnail' (thats what i use)
- 'click' on COPY adjacent to the "Direct Link" (one of the options that will appear on the right hand side)

now pop back to your Z-Club forum and 'click' on the little portrait picture image.
The following will appear: with the cursor flashing in the middle, now just press 'CTRL - V' this will copy the direct link from Imgur into the forum page


I kept trying until i found a way that worked. 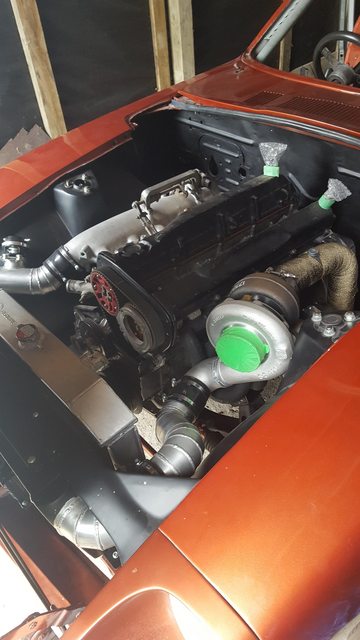 For the first time in probably a good 4 years the car is in the same city as me and I have my own garage to work on it! I've made more progress in the last 3 months than I have in the last 5 years

The only down side to having the car with me is that Dad's tools are no longer just in the other room. But dont worry I have remedied this with regular tool shopping excursions.

The car is however still not running, but I have plumbed the complete fuel system from fuel cell to surge tank to fuel rail and back. Its running a DW250iL "lift pump" into the 5L surge tank. A DW300iL main pump running through a 10 micron fuel filter.

The oiling system has also been fully plumbed with a external head drain, catch can and oil cooler set up. The only annoying thing is there is a snapped oil pan bolt. Luckily the Rb26 has 2 sets of bolts for the oil pan and I've managed to modify my pan to work with both but I'm going to have to take it back off as it wont stop weeping.

And I've just been hooking up hoses and planning out wiring runs and vacuum lines which will be my next major task and then hopefully it should be ready to turn over. Couple of pics of the engine bay, my ecu mount and my coil bracket I've made.