Ok, bits of the body work are off for some surgery. It should have been sorted before the paint, but thats another story.

Going to cut the current ZXR Wing off so it can get fixed to properly fit the hatch, and look like how it should be.
The mould was taken off a real ZXR wing I brought from Nissan Motorsports in CA, but that his since been sold to a guy in France.
I will probably get my mould tweaked now as well, so at least if i need another its good to go!

Front fenders need around 1" widening, so those to will come back looking very different.
The doors will need some love as well, but mainly fixing some minor cracks and making them good.

All the body work was purchased from Arizona Z-Car back in the day he done FRP panels... this set was sitting outside under a tree for a few years i understand, half his garden was imported with the bits when it came over.

Once the tweaks are done, they will get re-fitted and then back again for front air-dam final mods and fit up etc... 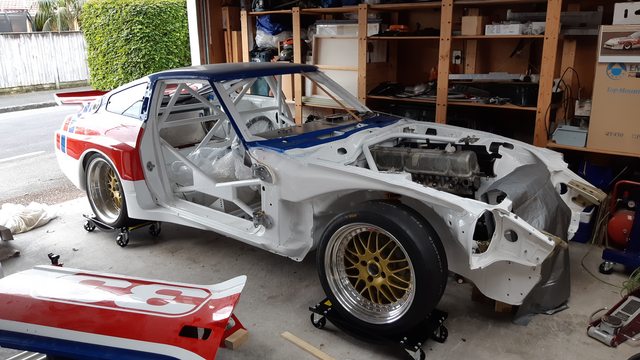 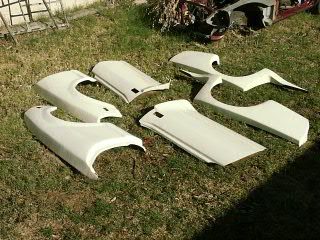 In a few weeks the car will venture out into the sunlight for the first time in over 8 years. It will be off to have new sway bars fitted front & rear, some small tweaks to the adjustable rear arms and for the headers and exhaust.

This week a few goodies arrived from Aussie, a new single piece fuel rail to replace the old one, custom drilled to suit my throttle body centres, and a replacement distributor that uses magnetic sensors for crank and cam timings, though we will only use it for cam timing, as the Crank will have its own trigger wheel. Those parts are from EFI Hardware (Speed Technology) in Aussie.

And a few small bits off to the platers, colour to be Gold Zinc. I did get them blasted first, but they used quarry rocks for grit instead of beads so had to smooth them out with a wire brush and sanding... The power steering pulley is beyond repair, so will need to machine up a billet one... 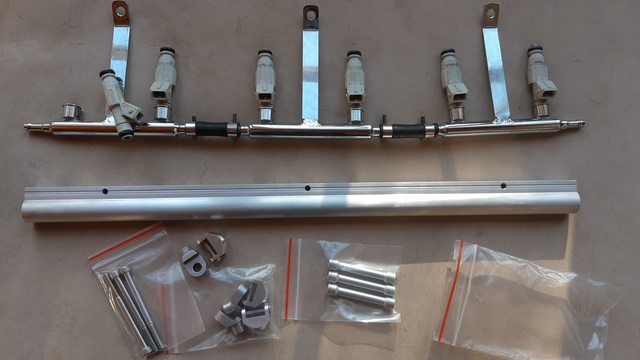 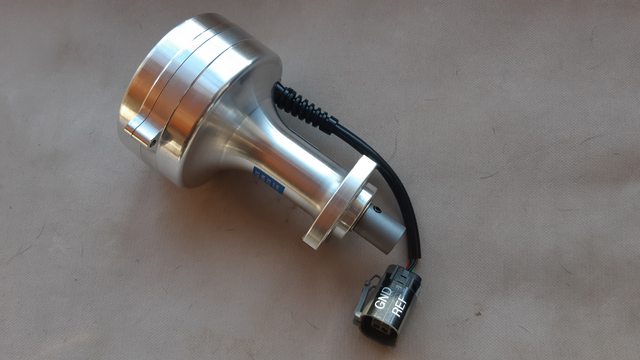 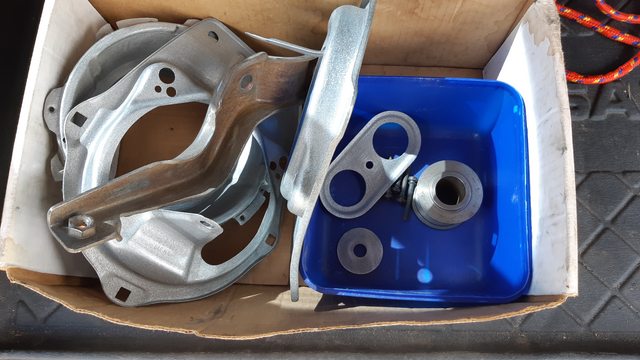 I've been jealous well before that, but seriously jealous since the rocker cover.
Top

The Rocker cover should be in my hands tomorrow morning...

Had one seat repaired today, had some little fury thing chew a hole in it while ago whilst in storage. I bought these seats new about 15 years ago. Unfortunately some of the foam padding has started to turn into dust.

Don't really want to buy new seats at the moment, can be an upgrade in a year or so... 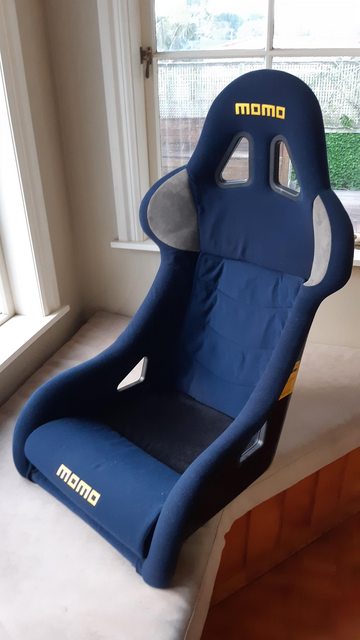 I know what Indiana Jones felt like when he first handled the holy grail... 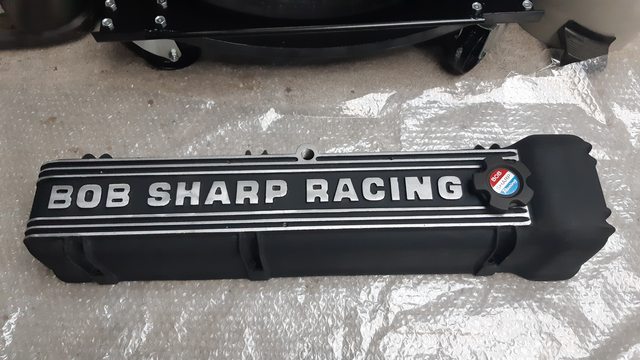 Got the top of the dash all fitted up today. A job I have been putting off. Trimed the front edge as well as cut it in half to make it easier to remove once the windscreen goes in. Will take it to get powder coated on Monday. (Colour: Matt Black).
Trigger wheel made, and its currently getting plated.
Its a 36-2 wheel, dimensions taken from the Motec sheet...

A few bits back from the platers.
Would have been more shiny if they had used soda instead of Kryptonite when blasting...
I aim to use molded covers painted white in lieu of headlights, but if I decide to add them one day its ready... 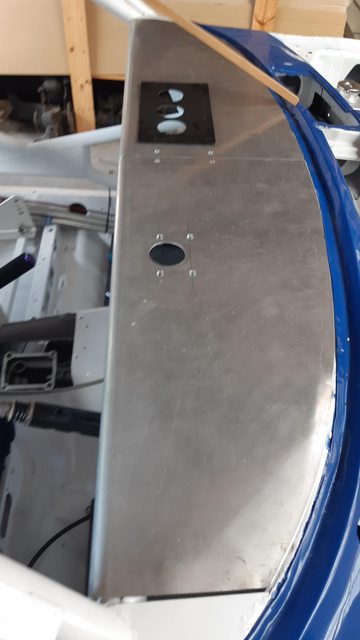 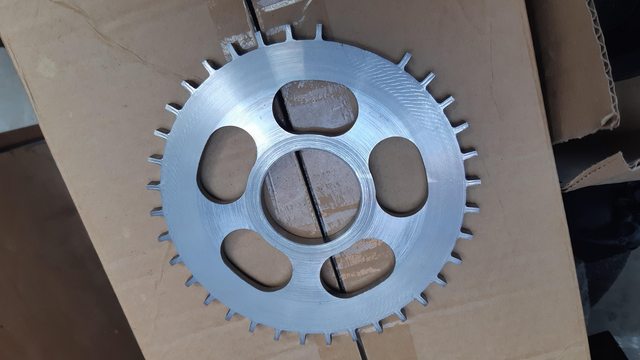 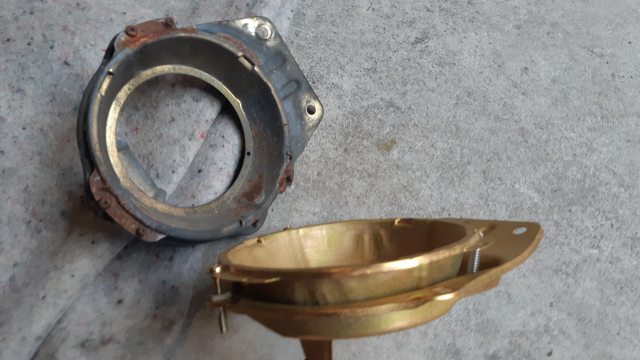 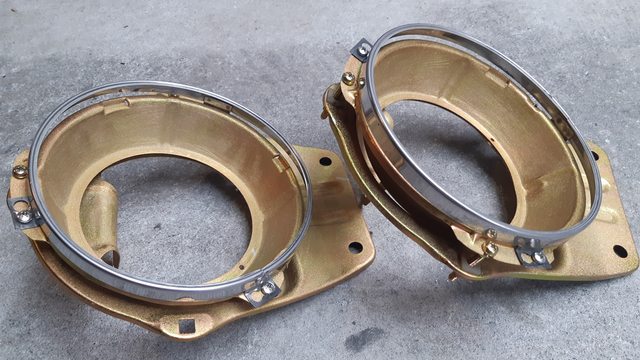 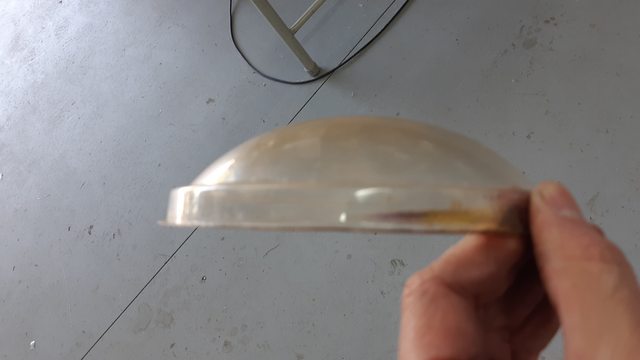 Engine made it to the stand...

36-2 wheel made as per the Motec diagram, fitted but not fixed onto the Nissan Motorsports USA L6 Harmonic Damper. 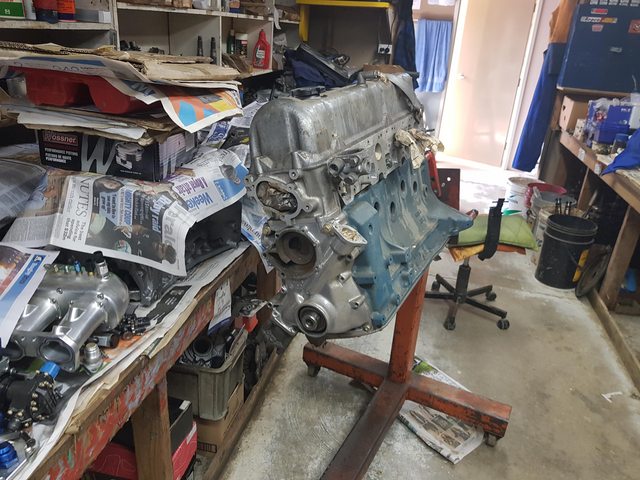 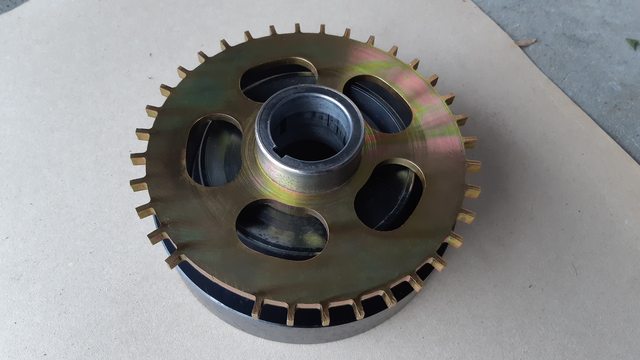 Hi Grunzter,
enjoying your build!
I have some parts needing plating soon. Sand blasting them myself (not using rocks....) Who do you use and are you happy with the results?
Thanks
Top

Thanks for posting, two great build in progress on the forum. Many thanks, you guys have made my day.
Bernie Kant
Club President
Top

I use these guys for plating.
http://www.acmeplating.co.nz/

Rear name plate backing from the powder coaters, just need the "Bob Sharp Racing Wilton, Conn." added. Dash also back, came out a little semi-gloss rather than matt... may need to get it flocked (another day). 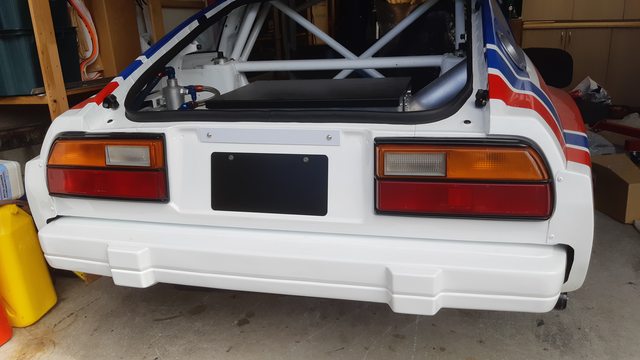 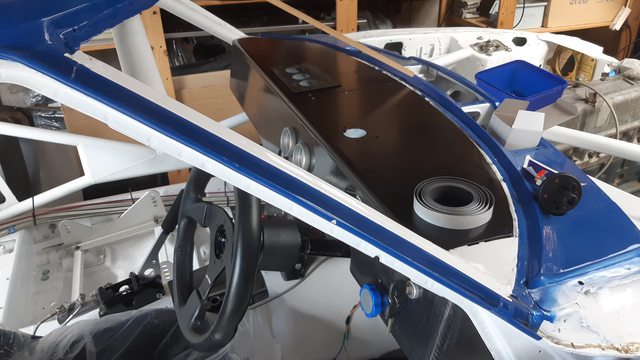 Made up a simple mount for the six coils, just need to mount it to the car now. 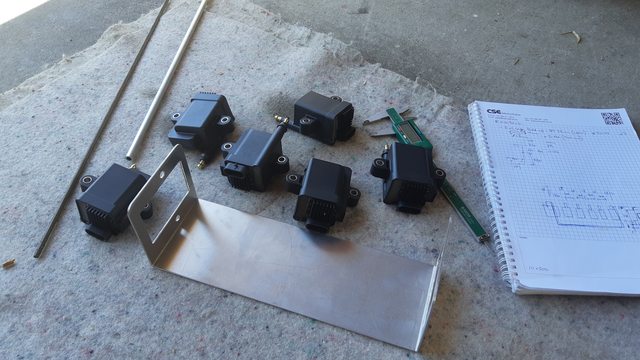 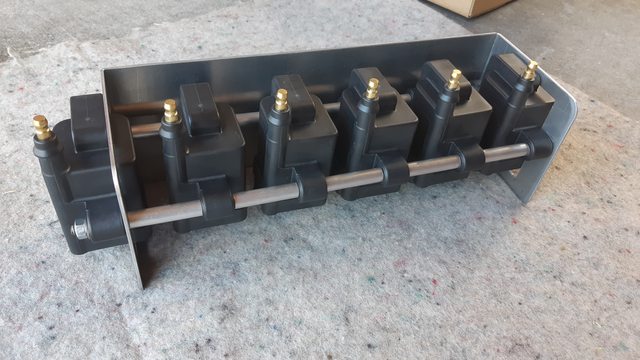 Also got a Steering wheel quick release thing, this one is form B-G Racing UK. Made the steering wheel location just right, and now I can actually get in without looking like a contortionist. 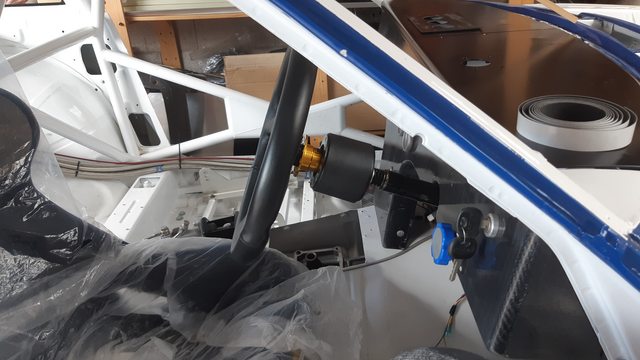 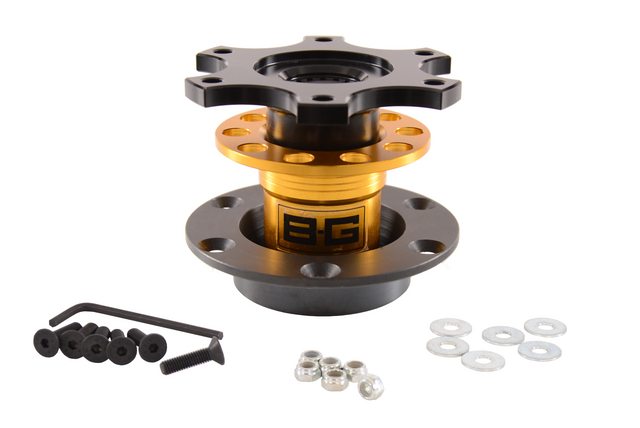 Drilled a few holes for the outside battery and ignition master cut out switch. Fits perfectly, and has the old heater hole below it so its easy to wire to.

Also started plumbing the fire suppression system, half way there...
Six nozzles, three in the engine bay, one in each foot well, and the last will be back to the fuel cell area. 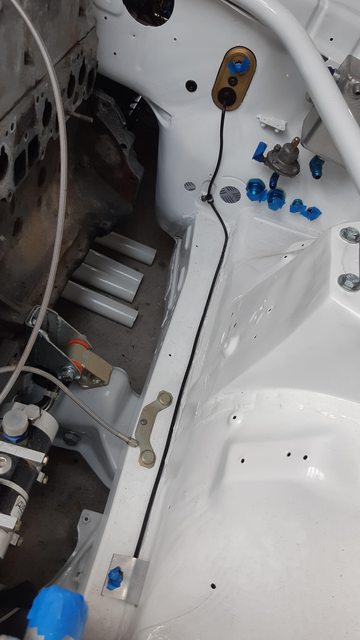 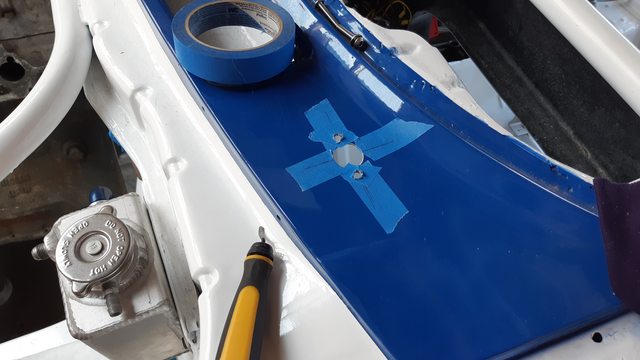 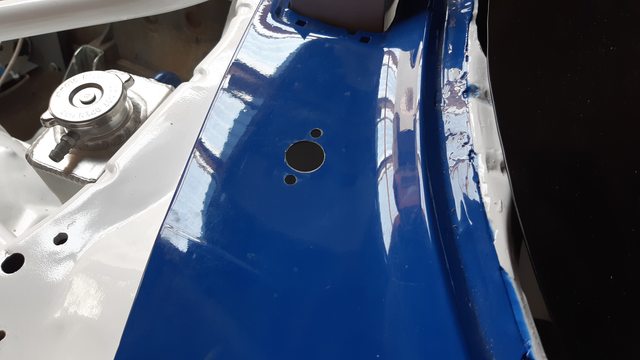 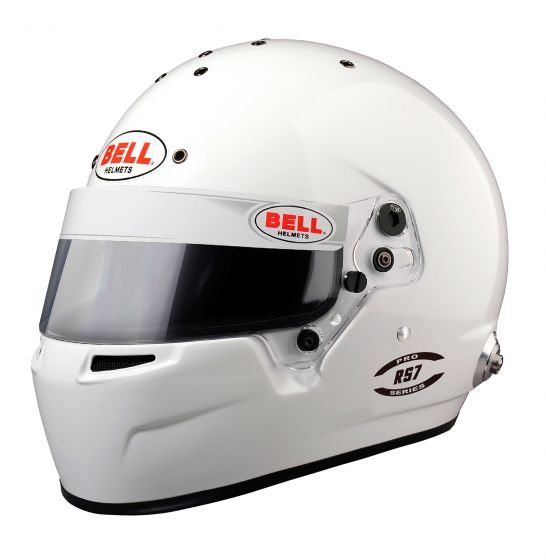 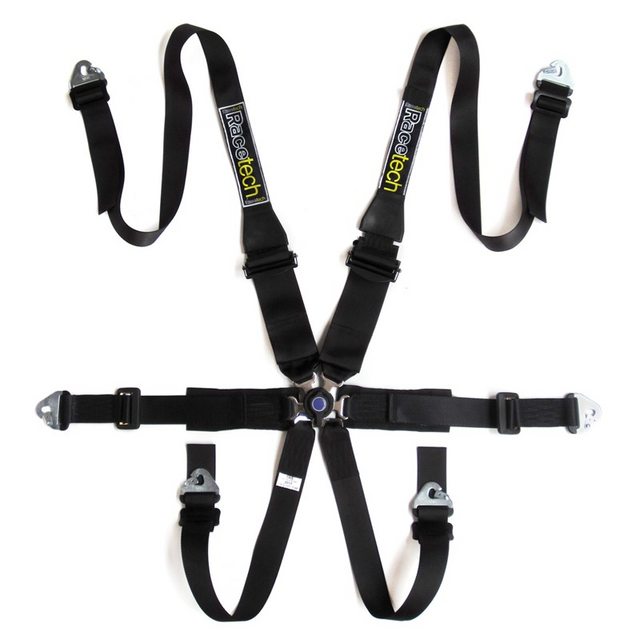 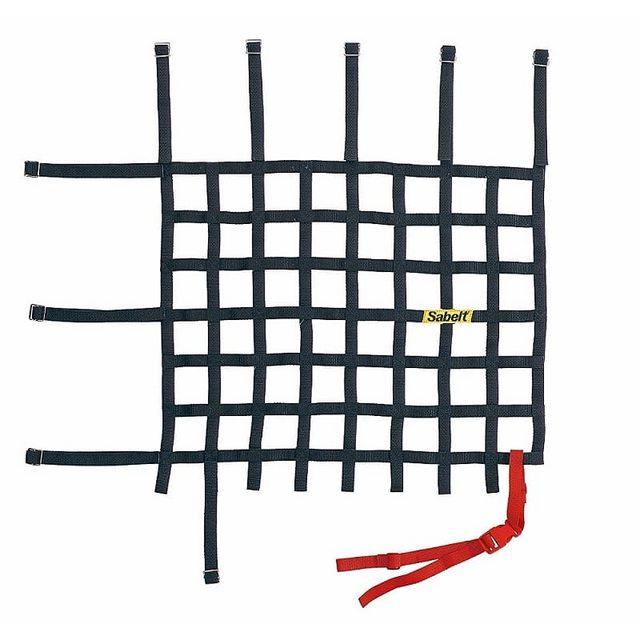